The Power of the Old Fashioned Thank You

To count the many ways to say thank-you is alluring.  Perhaps even more alluring are the various languages in which it can be said: English, Russian, Tigrinya (Eritrea), Spanish, Jamaican dialect, German, and Ukrainian just to name a few.  It is also important to know that some people express gratitude through actions.  They will give a card, gift, flowers or extend an invitation to dine at a fancy restaurant. And believe it or not some people usually count on giving a session of revved up sexual intercourse.  For them there is no other thank you as grand as that.  If anyone is surprised about this, you are not alone because I often wonder why the method of procreation has to be dragged into almost everything we do.  Is there a presumptive reminder here?  I leave this for the rocket scientist to figure out :). 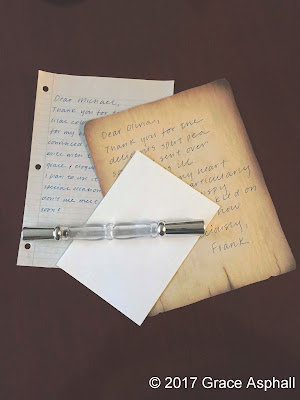 In the meantime, the improvement in technology has given leads on how to funnel thank yous.  Send a video message, skype or do FaceTime.  Online shopping would serve well for the people who express gratitude through action.  Buy and ship. No waiting on lines as seen at the Post Office or elsewhere.  Likewise, there are others who would rather send an electronic thank you.  Chose an item be it word-based or pictorial and then upload and send to the intended recipients via Facebook, email or any other form of social media.  This method is super-duper for the frugal, lazy bones and the people who view thank you as a trend instead of good breeding.  On the other hand, such senders will quickly remind the recipients who oppose the method that it is the thought that counts. Sure enough it is good to keep that thought and treasure it too but the concept of leaving bricks and mortar to exist in a virtual world has taken away the person to person interaction which contributes to a joyful soul.  Some things are more acceptable when they are not in an artificial state especially among the people with strong emotions.

Electronic devices amount to fun for some people.  They are drawn to the assembled pieces of gold, aluminum and other materials which constitute a computer. The truth is that the computer has a brain like the human and can be programmed to do or say anything.  It can be polite: Tell me in a few words what you are calling about. It can be insulting: I am afraid I do not understand you.  It can be curt:  Goodbye.  It can be unsympathetic: You do not have sufficient funds for this transaction.  Regardless of how efficient a computer is it does not give the same vibrations or connectedness like a human would.  Thank yous should be a part of our daily interactions with people.  For example, inasmuch as we pay for our taxi rides, we should say thank you to the driver when we get to our destination.  If someone holds the door for us we should say thank you.  If someone bags our groceries at the supermarket we should say thank you.  If someone gives up a seat on the train to another rider, it is incumbent for that rider to say thank you.  We should never ever take thank you for granted or hold it for a ransom. A thank you doled out could make someone’s day.

It is poignant to me whenever I receive a thank you note or card which is handwritten instead of being typed.  It is enlivening.  It leaves a great impression.  To top it all, the five senses will be involved upon receipt.  It will replace what electronic means has robbed us of.  A good old fashioned handwritten thank you note or card embodies civility.  Sometimes our daily maneuvers should not be centered around quickness or anything artificial. Instead it should be about the basic things in our environment that use to bring us satisfaction and happiness.  Therefore, it’s time to retrieve a few note pads, fountain pens and inkwells and start writing THANK YOU the old fashioned way again.  Someone will be eagerly waiting to receive the precious back to basics.  Pick a leaf from a tree or take a petal from a rose, fold it in the note and then place it in an envelope.  Or, roll the note and put it in a tube. Upon receipt, it will boost the five traditional senses: sight, hearing, taste, smell and touch.