You Cannot Shoot Pool with Rope…Diabetes…Impotence

Every so often we strategize our goals and purposes and then take aim yet fail in attaining them. Some people can cope with the results and some lose hope while others will keep on trying. In any case, though, a near miss at success is disappointing. Taking stock of the situation, it would be rather askew not to inject an adage from the elders of days gone by. They had a plaster for every wound so to speak. The adage that comes to mind is: Young boy a swear fi ripe coconut and ripe coconut a swear fi young boy. Clearly, the boy’s aim is to reap the coconut and then enjoy it; whereas the coconut in its ready state has one intention and that is to fall and hit him on his head. Sometimes an adage gives comfort in a situation and at another time it serves as a kick in the butt, a hint to try harder and with a stronger plan. 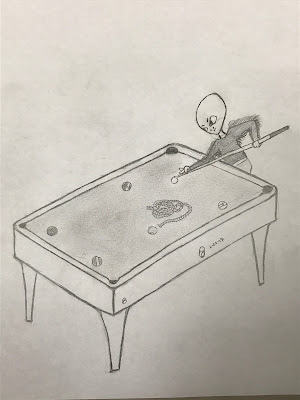 Illnesses can be viewed in the same manner. We swear against them and do everything possible to avoid them. Nonetheless they still attack us. Free radicals, environment, and artificial ingredients in foods are usually blamed for the onboarding of some illnesses. Gluttony is fingered too. On rare occasions heredity is also drawn into the situation. Diabetes is one of the illnesses that is linked to heredity. I bring to mind my childhood when diabetes was referred to as sugar by the elders.  They concurred that people suffering with diabetes consumed too much sugar. If they suspected anyone of being a diabetic, they would tell them to pee and place it in a spot to see if ants would “follow it”. If the ants did, the person who donated the specimen was a diabetic by their standards and stood the possibility of losing a leg or eyesight.

To the contrary the elders also told us that eating too much sweets/candies is one of the causes for rotten teeth dubbed “bun rice” (burnt rice). Adding to that a child was repeatedly told that devouring a large quantity of sweets would produce worms in their bodies.  Were those elders trying to confuse us?  Perhaps that was their way of scaring us into keeping sound healthy teeth. To witness a smile showing a bunch of rotten teeth wasn’t pleasant. Neither was it a pleasant feeling when worms mostly came out at night to tickle our butt-area. In addition to that was the mayhem and excitement created amongst some of us when one dangled as we pooped.  We frantically ran around screaming and hollering, TAKE IT OUT! MURDER! MAMA! WORM!  It is no wonder some of us to this day are traumatized on sighting a worm. While the obscure treasures of the Third World linger, the essential point is that diabetes is an awful disease.

I recall one stormy Sunday evening when a friend expressed to me that he is smitten with diabetes which has him going back and forth to the Doctor and on a few occasions resulted in hospital stays.  I was impressed with his honesty as he revealed that this disease had interrupted his sex life. Today only a few men would have been so candid. The others are with ego and would rather die than to let anyone know that their penises can no longer muster a full erection. Pssst! Hey men! Let me pause to say that it is okay if your huge spout or your little nuisance cannot function the way it used to. It is with hope that you had used it wisely. Give thanks for life as it is now.  Also give thanks for the good times, the many rides, and conquests. Beat yourselves though and ask for forgiveness if you had caused damages. Your drive towards sex may have ended prematurely but not your life. There are other things in life to be mindful of other than sexual intercourse.  Even the life of an energizer bunny must end one day. Or, as the elders would have said: every rope has an end.

Listening to my friend, as he spoke of his diabetic condition was very interesting. It was not a pity party at all as most people would have expected. He mentioned about his extremely caring girlfriend who monitors his diet and is quite satisfied with the “new him”. He expressed his happiness in holding hands with his girlfriend when they take strolls, something he had never done before. Admiration for the curves on her body devoured him, tracing every details with his hands, instead of just lunging at her vagina. He seemingly gained a new lease on life which allows him to explore her beauty that was taken for granted. The invitation by his Doctor to try Viagra didn’t chalk up to anything much. Using it once was enough for him. A comic by nature, he said that he appreciated the fact that his penis can still hold up its head, on its own, enough to blow its nose. LOL.

My friend is a blessed man because currently which young woman in her right mind wouldn’t want to have a man who can penetrate her with a rock hard penis during sexual intercourse. Alternatively, it’s a known fact that in the case of an impotent man some girls are contended to go along with the mantra: What him lose in the waist him gain in the face…embracing oral sex. Of course, I didn’t dare to ask my friend if he indulged in oral sex. As far as I am concerned it is a personal and private activity and should not be broadcasted even if it makes you feel as if you are on the glory train and would like to testify about its goodness and what it has done for you.

As the evening narrowed into night, the conversation between us meant a lot to me. I relish talking with people and especially with those who are going through an experience or have been through an experience. There is something to learn. As such the trajectory on diabetes should be exposed before many are ravished. In summing things up, my friend believes there are women waiting in the wings to relieve men of their money because their sexual prowess is no longer in tip top form. The younger women are apparently the ones to look out for. They are marketable among older men, haughty and with challenge, whose aim is to show the world and people in their circles that they are with a younger woman. That will not be the case with my friend. He refuses to entertain any. None will hanker around him for his pension or hard earned money because he has revealed his sexual slogan: You cannot shoot pool with rope.

Tah-tah!   Be true to yourself so that you can be true to others.