Intimidator, tormentor, aggressor are some of the words used to define a bully.  The word terrorist which weighs more in meaning is often used by some people in an informal setting.  There is no gender discrimination when it comes to being a bully.  A male can be a bully likewise a female.  A bully is not necessarily a “screw-face” or a person who wears tattered clothing.  He or she can wear a pleasant face and also dress to kill.  Oooops!   See, the ultimate dogma of the bully cannot be hidden, “dress to kill” as written here is in essence “dress fabulous.”   Anyway let’s keep our minds on the bully.   A bully can be muscular, scrawny, short, or tall and be of any nationality, color or creed.

In the island of Jamaica phrases are popular.  Thus on the colloquial market “Bull buck and duppy conqueror” is used when referring to a bully.  How is this relevant to bully?  Looking at the phrase, the word “Bull” is versatile.  It is associated with the financial market, virility, and also scopes in the male species of the upper and lower class of animals to the thresholds of profanity.  However, the main purpose of it as used in the phrase is to project force, specifically within the realms of the lower class of animals.  A bull in its ferocious state is known to have left many individuals nursing physical pains and wounds.  Its weapon is the head, using it to thump or “buck” its victims.  There is also another observation when referring to the bull.

Some people will say “Bull Cow,” which has many arguments surrounding its correctness.  In my opinion the bull is not a stranger to the world of entertainment and in the throes of being entertained who knows the names we conjure or even dare to say aloud.   One thing that does remain certain is the fact that the word bull triggers thoughts of drive, doggedness or tenacity, all in line with the bully.
Continuing with a full account of the phrase “Bull buck and Duppy conqueror” and its relevance to a bully, there is no doubt that the word “Duppy,” otherwise called ghost or spirit, injects fear given the paranormal beliefs that surround it.  Some people will swear that they have seen duppies of all shapes and kinds and in diverse places while others will only say that they “feel its presence or hear sounds”.  In the village where I was raised, it was forbidden to kill the bird known as “Ground Dove” because it was touted as a duppy.  Do duppies eavesdrop and travel around incognito?  Maybe at the time the elders wanted the bullies to heed the commandment “Thou shall not kill” so they purposely linked the Ground Dove with the duppy.  The duppy is elusive and has power, much more than a bully.  Yes, in the past a duppy was elevated more than it is today.  So whenever someone was unkind to me I would secretly wish that a duppy would just “blow” on that person, letting him or her fall to the ground writhing in pain.

The duppy is a menace like the bully.  I have been told many stories about feisty duppies who boxed people in their faces, leaving them to foam or cry out for help.  A duppy even has the nerve to pinch people while they are asleep.  According to one source the black and blue mark we often awake and find on our skin is evident of a duppy’s trait which reveals that the duppy, quite like the bully, enjoys attacking a peaceful person.  To be honest I would rather live on Mars than to encounter a duppy with zest and violent behavior.   Could you then imagine the might of the human who has captured and conquered a duppy?   Or, the might of the individual who punches others, leaving results that match the bull’s when it bucks its victims.  The phrase “Bull buck and duppy conqueror” surely spurts a comical air or set the tone for a blockbuster ghost and bull fight movie but ultimately when equated to a bully it is not a laughing matter.

A bully comes in all forms and deeds and can be found anywhere, including our homes.   I recall my juvenile years at the dinner table where my brothers on numerous occasions diverted my attention to “the big scorpion on the wall” only to find out that they had tricked me so that they could seize the last and juiciest piece of meat from my plate.  They would laugh and make big chews, pleased with their conquest while I bawled and rolled about the floor, knowing that my meat would never come back.  My parents being on hand would scold them out of their laughter, telling them that “Practice becomes perfect.”   The reprimands of my parents would be of great use in today’s society after seeing and hearing about all the blooming bullies especially the ones who have become so perfect at snatching people’s iPhones and wallets.   The bully has a revolting insatiable thirst for victims.  A person can be victimized because of his or her sexual preferences.  A child that is holding good grades in school can be bullied because of his or her achievements.  Likewise is the child who is not wearing designers’ clothes to school.  Or, the child who is able to splurge on snacks more than others.   The bully will also attack his or her schoolmates based on the parents’ appearance.   My younger daughter, during her elementary school years in Brooklyn, New York, had told me to wear jeans and sneakers to parent-teacher conferences so that her classmates could see that she has a young and “hip” mom.

A bully lacks self-respect which is the key ingredient to having respect for others.  We see it daily in the simplest kind of physical movements.   An incredible cache of antics and habits have been reaped from some commuters on the city’s subways which resembles the traits of a bully.  For example the person who sprawls across more than one seat on a crowded train with no intention of offering a seat to any of the tired fellow commuters in view.  Or, the person who wears a backpack on a crowded train and then curses at the straphanger who asked that it be removed and placed elsewhere.   A bully has an urgency to be in control. It is seen in relationships.  A lover is sometimes referred to as a “bed bully” because of his or her conduct in bed.  Sometimes in our daily maneuvers we may come across the “control freak” whose mantra is “It’s either my way or the highway.”  The individuals with such extreme behavior are also referred to as “silent killers.”  This is so because the people in their path are afraid of retaliation and loss of friendship and will therefore bottle up their feelings to the point of bad health.  The human bullies’ behavior is no different from the bullies that exist among wildlife and domesticated animals.  They lack compassion and are not afraid of the dire consequences for their wrong doings.  Most of us who have experienced rural living, particularly in the tropics, can attest to this fact.  Looking at the rooster, it uses its fancy foot works to bully a hen into having sexual intercourse.  A lizard will chase one of its counterparts to the tip of a tree limb in an earnest bid to please its carnal appetite, not caring about the precarious spot.

How did a bully achieve his or her unkind disposition?  Is there something in our foods that triggers the behavior of a bully?  Are some movies instrumental in a person becoming a bully?  Is bullying a learned behavior or is it genetics?  Are some people susceptible to bullying more than others?  Is it possible to tame a bully?  What have scientific studies revealed about the bully?  Can science intercept the making of a bully?   How can society put an end to bullying globally and individually? These questions and more become common place each time a bully wreaks havoc.  Would it then be a fair statement to say that the barbaric behavior that we are witnessing in our society today is an indication that maybe we are not as civilized as we think?

Bullying has now become a hot topic so at the turn of the year 2012 I mentioned to my children and grandchildren to be on the lookout for bullies.  In response to that my energetic seven year old grandson who is in First Grade at his school, and has been officially identified with reading and comprehension skills at the Grade 5 level, decided that he would write an essay about “Bullying in Schools.”  On this note I said to myself that there is no way I should silence the voice of my grandson.  Below, in unmodified form, Shadrack Sims of Buffalo, New York has expressed his thoughts of a bully in an art work and essay. 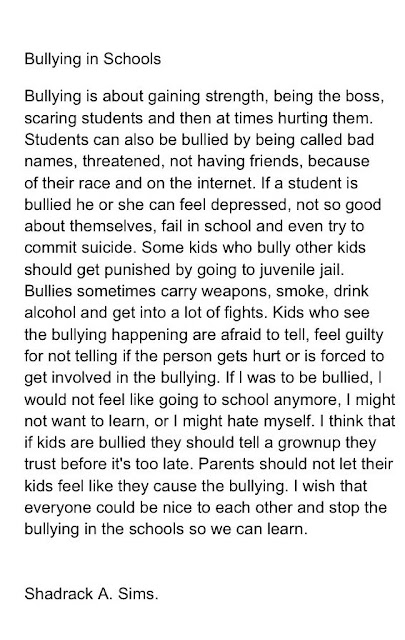 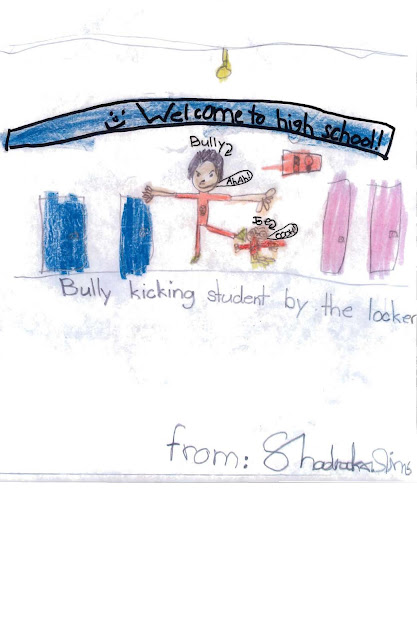 Tah-tah!  Incline the tree when it is young.

Email ThisBlogThis!Share to TwitterShare to FacebookShare to Pinterest
Labels: Behavior