Who is Santa Claus?

I have observed that children as young as five years old, in today’s society, have come to terms that Santa Claus is bogus.  Compared to back in the day when children would embrace  Santa Claus as a real being for as long as possible, especially in places such as the Caribbean where there was no fireplace or chimney for this gift-toting man to slide down with his luggage.  Neither was there snow or a sleigh being drawn by reindeer.  Below is an unedited special op-ed essay on this topic by my seven year old grandson, Shadrack Sims of Buffalo, New York.
_______________________________________________________ 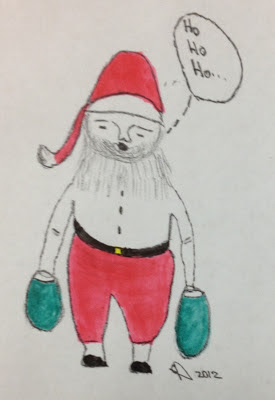 Santa Claus is known as St. Nickolas, Father Christmas and simply Santa. He was known for bringing gifts to the homes of good and poor children during the late evening and overnight hours on Christmas Eve, December 24th. Santa Claus is mainly seen as a joyous, white bearded man sometimes with glasses wearing a red coat with a white collar and sleeves. He also wore red pants with black belt and boots.

Due to old time beliefs from the 1820s, Santa Claus is said to have lived in the North Pole with many elves and nine flying reindeer. There is a song from the 1934 "Santa Claus is Coming to Town" where Santa is said to make a list of children from all over the world and put them in order of naughty or nice. He gives toys and candy to the nice kids and coals to the naughty kids. His elves help to make toys for children and his reindeers helps delivers the toys. The names of his reindeers are Blitzen, Vixen, Prancer, Comet, Cupid and Donner.

Parents lie to children to re-live their childhood dreams of St. Nick by telling children to be good throughout the year and they would be rewarded with gifts from jolly old Santa. They have kids make up a list from TV commercials that show them toys and other gifts that they would want during Christmas. Some kids become very uncertain of whom Santa Claus is and starts to ask questions about him such as how could he possibly travel around the world in such a short time going down chimneys to give gifts. Instead of parents telling kids the truth they tell kids stories about Santa’s weird powers.

Finally, St. Nick or Santa Claus as he’s known is a good Bishop who now instead of keeping his identity as a Christian Bishop and Saint is now appearing in magazines, on billboards and in stores encouraging consumer products and commercial success.

I hear that Santa Claus is friendly to kids who are nice and if you see him call me and describe how he acts when you see him in person especially when you visit the North Pole.

Tah-tah!  Treat our children well.  They are the future.

Email ThisBlogThis!Share to TwitterShare to FacebookShare to Pinterest
Labels: Children