Is Crossing Legs a Bad Habit, Unhealthy or Sexy? 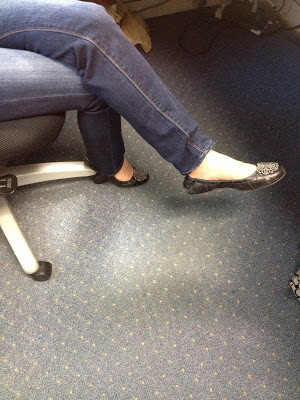 When crossing legs, the long skinny ones seem the perfect choice to maneuver this custom.  Amazingly as I travel the subway I have discovered that this is not the case.  It is evident that the fittest of the fit comes in all forms.  I have seen commuters who are pleasingly plump in stature cross their legs with ease.  Their dexterity is mindboggling.  It is then no wonder that I should find it necessary to abort the “F” or “B” word when referring to them.  In today’s world where sensitivity surrounding physique is at its peak, it would behoove us to substitute the words “fat” and “big” with pleasing plump, voluptuous or well-built.


Seeing the vast amount of commuters crossing their legs, as they ride the trains, had me contemplating on several occasions to do the same.  Try it; I would hear my inner voice saying. Your legs look more appealing compared to the ones in your view, it prodded. Unfortunately my inner voice hasn’t been much of an influence to eradicate or override the old school teachings.  As it were, back in the day, leg crossing was forbidden among the females in my village.  Words such as vulgar, rowdy and loose were used to describe the guilty one.  The scorn sometimes went beyond your wildest imagination when it came to the house of worship.  There would be a cry against irreverent and ungodly behavior especially if the female indulging in such custom was a member of the church.  Rest assured that she would be brought before the helpers committee board regarding her conduct and the possibility of being suspended from one round of Holy Communion. 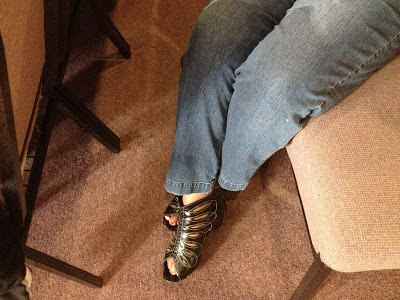 The elders were very alert.  They had an aptitude for the tiniest detail.  They also never ceased to amaze me when they used their eyes as minds. They became incongruously suspicious about any female who crossed her legs and then discreetly constricted her muscles to hold her legs tightly together.  “Take down that cross! And what are you squeezing?” they would yell.  Or, at another time, depending on what their eyes are telling them, they would say, “stop cutting ten and rubbing out the seat.  Keep still!”  As far as the elders were concerned ladies should not lift their legs higher than the steps they take when they walked.  The proper and polite way for a lady to sit was in the upright position with shoulders squared, knees together, feet planted on the ground, hands in laps and chin up.


Listening to the elders was imperative but as time went by I began to associate crossing legs with status.  The affluent and hoity-toity ladies were always sitting with their legs crossed.  I was fascinated by this deportment so the minute I entered High School I decided that it was time for me to begin crossing my legs.  To my surprise I did not know that the sharp eyes of the elders had extended beyond my village as I sat perched on a stool in my Home Economics class with my legs crossed and shaking my body.  “Don’t,” my teacher said, looking at me stunned.  “Girls should not cross their legs nor shake their bodies”.  I bowed my head, ashamed, thinking that the only time girls could cross their legs and get away with it was when they had to delay their pee due to the lack of immediate convenience.  Consequently I kept wondering what was so damning about females lifting their legs to cross them.  It was acceptable for the male to throw their legs anywhere and anyhow but not females.  Were the elders practicing double standards?  Going a little further, perhaps if it weren’t for the beliefs and principles of the elders, I could have been the Kristi Yamaguchi of my genre.  Maybe I could have served up cartwheels, and mind boggling flips and turns at many Olympic Games and elsewhere.  I could have been a gymnast, a ballerina.  The sky could have been the limit for me. 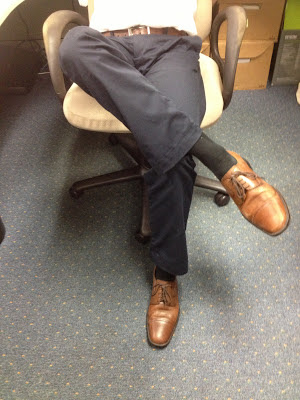 Talking about limit, there is none surrounding on what materializes on the trains in the subway from day to day.  For example, some commuters will indulge in their exercise routine.  I recall riding the ‘Q” train, one morning, where I witnessed a man sitting in the lotus position looking wide-eyed and busy tail so to speak.  He had scooped his entire body and fitted it on the narrow seat.  I kept my eyes on him and then decided that he was a show off and not in a meditative mode as the pose would have implied.  The thought gave credence that a Humpty Dumpty fall would be proper as the train tumbled along but to my surprise he held his balance extremely well.

Looking at the way some commuters cross their legs this brings to mind the many unofficial talks about the ill effects of crossing legs.  High blood pressure, poor blood circulation, varicose veins and back pain are some of the examples. In the field of superstition it has been mentioned that a pregnant woman should not cross her legs because the child will be born with knotted intestines or with legs crossed, obviously adopting the mother’s behavior.  Crossing legs can reveal what’s going on in the mind.  Actually some people have alluded to the fact that it is easy to read a person’s body language depending on how the legs are crossed.  A man will cross his legs to hide an erection.  A female will cross her legs to maximum tightness against a male who wants to use her as his sexual thorough fare.  I have observed that some subway commuters will cross their legs at the knee and rock back and forth in their seats even when it’s not warranted.  It’s interesting to watch the look of glee and then giggle with caution.  Adding to that sometimes I wonder if there is a mini Picasso in their bodies stirring up blood and doing some mad dash brush strokes flushed to the faces which reminds me of a variegated garden of flowers.  Clearly the elders back in the day didn’t want the females to discover the Picasso in them.   Hence, is crossing legs a bad habit, unhealthy or sexy?  The choice is yours.

Tah-tah!   Be observant. Things are not always dull.