A Hidden Diamond In Plain View


Here today gone tomorrow is one of the most defining phrases of the 21st century.

We should make good use of a moment, time, things, foods and places as the world turns and change becomes evident. We may rebel at whatever the change is, be it for better or for worse. People who are optimistic will always see change as growth and prosperity.

Old buildings and even relics always capture my heart anywhere I go. I often smile when I see them and imagine the many stories and secrets that they hold. In my Flatbush neighborhood in Brooklyn, New York, there are a few such buildings. During my daily walkabouts I tend to ignore the old buildings that are right under my nose. I always aim for the ones in the distance as if they were better. 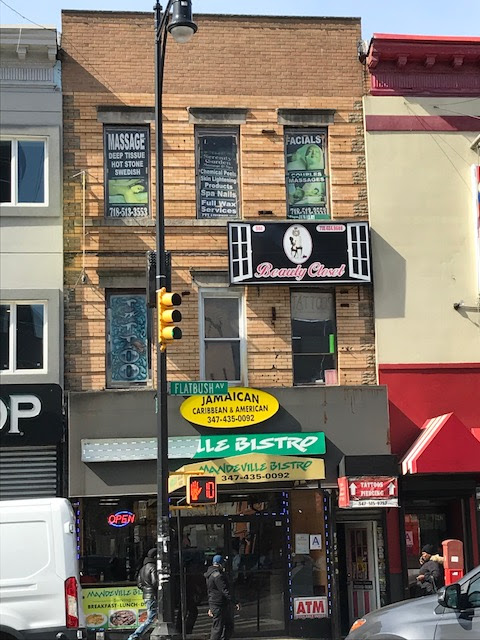 One day the stars, sun, moon or anything in the constellation had ordained it that they were not going to entertain my attitude of ignoring some buildings. So, as I stood at a stop light on Flatbush in October 2018, I looked across the street at a building I knew quite well that was under renovation. It used to be a clothing store and I wondered what will take its place. Will it be another clothing store? What will it be? The renovation boasted a modern look. A drastic change from what it used to be. Two floors above the main floor it appeared as if they are being set up as dwellings. The building stands next to a location which I frequent and I am sure that someone there will eventually say something about its purpose.

I finally decided to move along so I waited on the stop light to change in my favor. I did one last looking around and in doing so, for the first time I noticed that the building I frequent has two floors above it. The third floor windows were covered with posters which gave the impression of abandonment. No activity could possibly be taking place there. Who would cover windows with posters if they're in use? The posters even showed signs of aging. Inasmuch as that was my feeling and observation, I decided to take a picture. I was very much interested in its details: Serenity Garden, Massage & Spa. I then vowed to call when I returned home to see if it was an active business.

As soon as I reached home I called and was elated to hear the voice on the other end. I expressed my interest, made an appointment and since then I cannot get enough visits. The ambiance is set up for the purpose: relaxation. The staff is excellent, receptive, polite, pleasant and professional. On my first experience I alluded to the fact that I never dreamt that such a beautiful place existed in the midst of the hustle and bustle of Flatbush. I felt as if I was transported to an island where streams flowed and birds chirped. My soul was arrested for the remainder of the day and is still under arrest by such a beautiful find, a diamond right under my nose. So long Manhattan! You have competition.

Tah-tah! Patronize a neighborhood business. It’s either hit or miss.