My 2020 Experience With Onion In Bed

Let your conduct be without covetousness; be content with such things as you have. For He Himself has said, “I will never leave you nor forsake you.” - Hebrews 13:5 NKVJ (New King James Version)

I have had a close relationship with the onion for many years, much closer than its relatives: garlic, chives and scallions. The onion is a bumptious vegetable yet I can't seem to let it go. It releases a strong odor which makes me cry the minute I undress it and slice its succulent body. No doubt it’s a defense mechanism against interference. Yet, I continue to eagerly undress it and don’t know when I will stop. If to undress an onion becomes a crime, perhaps I would be first in line to be charged for bodily harm and devouring. And even if I was not seen attacking the onion on account of culinary necessity, my foul breath after partaking of it would be a dead give away. The onion is characterized as an unpleasant odor yet it enhances the flavor of foods in an irresistible manner. Tasteful. Delicious. Gourmet. It’s easy to become a repeat offender. 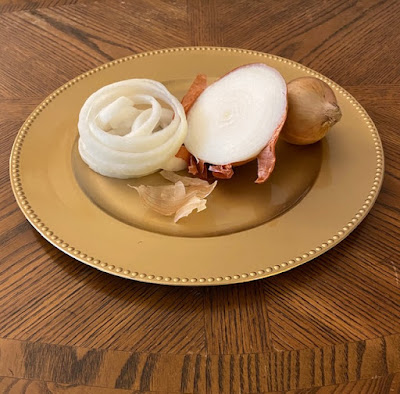 Besides cooking up the sweetest storms in the kitchen with some help from onions, it is said that they also have powerful medicinal uses. And in the superstitious world it has been mentioned that sliced onions strategically placed in one’s dwelling can heal the sick or keep evil spirits away. To be truthful the only bond I have had with onions is to eat them, raw or cooked. And then I'm sure to mask my intolerable breath with a peppermint candy before someone refers to me as “onion breath”. But what the heck, labeling me onion breath would be trivial compared to the destructive COVID-19.  2020 will always be known as a disastrous year. COVID-19 surfaced and quickly became a pandemic. Mother earth ravished. The fear of the pandemic, to be free from it or prevent it from attacking, forced many people to return to self-help and home remedies. Onions, bushes, orange peels, limes, lemons,  turmeric, ginger, thyme. You name it, anything that is a cooking ingredient inside our homes have now been touted as medicines. The pharmaceutical top-guns must be irate, frothing at the corners of their mouths, that some people in society have the audacity to side step their products and opt for the simple things in our fields and gardens. Hearing about and seeing the deadly behavior of COVID-19, to survive is a big deal. Symptoms or not. It’s all about protection and to still fear. And social media members posted a lot of remedies; too many to try. I have my doubts about some and still do. In times like this there are a few people who take pleasure in exercising their selfish minds and ways. They will piggyback with fake information.

COVID-19 doesn’t discriminate. I do not disrespect science and our scientists. It’s a new virus to them. Until the scientists put one and one together I decided to try an onion recipe as protection. I prepared it one night in June and before going to bed I strapped sliced and diced pieces of an onion to my chest (this was recommended). I then placed some on my body where it wasn’t recommended: feet, under my breast, around my waistline, and I folded some in a paper towel and placed it in my underwear. I had a good laugh at the item which reminded me of adolescence and hoped it was properly secured to prevent scorching. I then said my prayers and waited for sleep. By morning time, I awoke and was collecting bits and pieces of onions that had escaped from their hold. I chuckled at the mess and onion scented bed sheets all in the name of protection from COVID-19.

My grandchildren were awake in their bedroom so I went in to say good morning. Few seconds after entering, the oldest of the three eased herself up in bed and rested on one elbow.  “I smell guacamole”, she said, piercing me with a steady gaze. I sniffed the air, agreed that I did smell guacamole and then quickly left the bedroom, holding back a laugh. That day she was a magnet. A sleuth. A sniffer dog in law enforcement. Anywhere I went she followed me as if I were a suspect. Guilty of a crime. Guilty of harboring guacamole. Her following me around the greater part of the day and talking about the guacamole odor was a dead give away that she had told her parents about it. Eventually, seeing how hard she was working to prove herself right, I admitted that I had slept with slices of an onion the night before as a protection from COVID-19. The minute I released the information, she laughed and said, “Grandma, I knew I smelled guacamole. I knew it”.  She then ran to tell her parents that I had slept with onion slices strapped to my body.

Tah-tah! Nothing tried. Nothing done.