An idle glance at the sky will sometimes give more than one reason to do a double take. After much patronage, I see it as a canvas on which clouds create beautiful abstracts. The time of the day, behavior of the weather, appearance of the sun, moon and stars are not prerequisites for me to peruse the firmament. I can at any desired point look and adjust focus from amazement to wonder. Sometimes with much perplexity too. 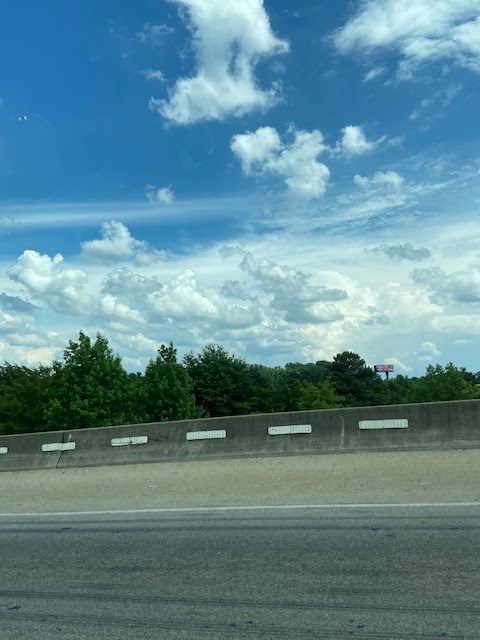 On many occasions I have peered from the window of an airplane, while in flight, to scan the chunks of clouds. A grand exhibition. Some were clusters of cotton balls, animals, humans and a spectacular display of Mount Rushmore with carved images of four past Presidents of the United States of America. Clouds are peculiar and elusive. Nonetheless, quick action and the use of a camera enable one to capture what is seen in the moment. And it serves as great evidence for people who are with the eyes and mind of an artist. Interestingly, the cloud formation of sheep and the picture which portrayed Jesus during my childhood, were frequent and the boldest of all the illusions. If the sky is where God is, then by all means it warrants heavenly thoughts and figures.

The beauty and the fanfare of the clouds in the sky, does not set aside the behavior of the elders who lived back in the day. They were skilled at reading the sky and its attributes. By doing so, they were able to announce rain, storm, time to sow crops, time to reap crops, fish catching season, sea-travel and the time of the day. Even more fascinating the elders had the ability to scrutinize illnesses, and then matched and named them from the things they saw in their environment.

Inasmuch as the elders had no formal training in the field of medicine, it was commendable to know they were capable of providing remedies and names for illnesses. But none quite as stirring as the name “shitting cloud”, a skin condition which seldom went unnoticed. The face and neck were the areas it mostly attacked. The relevance to fecal matter might be vulgar to some people but that was the way the elders operated. At least the ones I knew. They were blunt. They used statements that were simple, quick and easy to comprehend. Impeccable work. I admired their wisdom and rectitude. The twenty-first century has arrived and I still find all the information those elders provided and shared, during their time, useful and interesting.

I have never followed up on any new information for “shitting cloud”; with the exception that at some point in time, few people referred to it as “liver spots”. By now researchers or scientists should have found the official name, or medical terminology for “shitting cloud”. Perhaps it is truthfully named “liver spots”. I don’t know.  Besides that, I wouldn’t be surprised if a great amount of people will begin to look at the sky with new and renewed interests. And find for themselves the relevance of linking feces with clouds to name a malady. Chances are they may say to themselves, the elders were smart but naughty and ungodly. Contrary to such analysis, the elders’ works in those days were within rights and with good judgement. And all done in the name of self-help and home remedy.