Do You Use The Bible As A Safety Deposit Box And Nemesis Holder?

The simplest definition for the Bible is a book. It is a sacred book for Christians and as a result many have labeled it “the good book”.

The bible has been a controversial book for eons. Understanding its literature and dynamics is as difficult as saying the names of some of the characters and places mentioned in it. Hence, if someone should strongly engage me in a bible discussion, I quickly sit aside with sealed lips. And frankly I don’t know if there will be an end to doubts about the bible as bits and pieces of new information become available. For example, the most popular talk is that Jesus was black and not white as portrayed in the pictures that have become a masterpiece in most homes. Some people have even engaged in fist fights discussing the information in the Bible. And may the Lord have mercy on the person who writes the name God with a common or lowercase “g”. That would be the epitome of disrespect which warrants a rebuke. 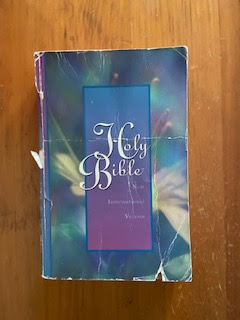 By religious teachings, defacing the bible in any way is not acceptable. It’s a holy book which should be handled with reverence and utmost care. It's not a thoroughfare like the public toilet walls where culprits will scribble: Sit because crab louse can jump 12 feet high. The elders back in the day were enticed by the high standard of the bible. They made use of any available blank pages and inside covers because they found it to be the most suitable and secured place to record birth, baptism, marriage and death within the family. Sometimes they even had the audacity to use it as a deposit box, stashing away legal tender notes for rainy days or emergencies. The easy access to family information made the bible a treasured book and because of that special attention in its handling became necessary. But curiosity over a period of time caused most bibles to suffer physical decline. Even in their poor condition they were kept and not discarded because to do so would have been a sinful act. Modern times and a paperless society have broken the habit of using the bible for record keeping. People have now turned to electronic gadgets to record important information.

But before setting the paper bible aside, perhaps there are other uses. It has been referred to as a weapon. And to determine that, social media sometimes exhibits the traits of anything imaginary and unimaginable. It is a force to be reckoned with. To give an idea: Two people were engaged in a war of words and revelation of character. One accused the other of being evil because it was discovered that the alleged evil person had written the name of a friend in a personal bible. The belief is that it was an apparent bid to dispense failure. It is no secret that most people have eyed the book of Psalm with fear and as I watched the video Live I wondered if the Psalm was used. David was a bad-ass who slew Goliath and the thought that David wrote most of the Psalm left me to ponder a trail of destruction by association. The bible injected fear in me when I was a child. It was a difficult time trying not to slip out of line with neither God nor my parents. Regarding the social media incident I am of the belief that a person who is challenged by the ability of a friend will sometimes see the friend as a nemesis. Justice will be to chant a Psalm for protection. Or, according to the Jamaican street language “bun a Psalm pan dem”.

Tah-tah! Do not cast judgement without facts.