The juicy details of the 2013 MTV Video Music Awards (VMAs) made their exit from the stage of the Barclay’s Center in Brooklyn with much fanfare.  As a matter of fact some people are of the opinion that the VMAs always produce at least one extraordinary item.  The amazing thing is that the juicy details should have been in their stale state by now instead of becoming newer and newer as time goes by.  A good parlance to the situation would be:  The older the moon, the brighter it shines.   If the public should lead by the example of the elders from back in the day, a nine-day talk about the VMAs’ juicy details would have been the norm, ceased at that point and classified as stale news.   Since this is not the case, it can be agreed upon that some things are more enjoyable the older they become.  One such item is wine.  It is said that its taste improves with age.  Given this, the juicy details of the 2013 VMAs in their own rights continue to live on long after the dregs have settled.

I viewed the VMAs on television from the confines of my home and was particularly impressed with the lineup of performers.  Not a bad treat to be having on a Sunday night, I said to myself, considering the marathon of useless reruns and unappealing reality shows on television.  The joy I felt was amazing as the performers took turns and mounted the stage, delivering their worth.  The VMAs ranked high with me in that moment and thus warranted my oohs and awws, the perfect human sound effects to show appreciation.  Furthermore it was imperative that the performers kept the viewers entertained.   I laughed, hollered and commented as the show got into full swing.  It was a night of sweet madness and a night to be rowdy without being apologetic.  Eventually, excitement got the better of me so I scuttled to Facebook where I met other VMAs watchers hurling comments at their favorite and not so favorite artistes, and celebrity-audience.  Who would have thought that Facebook would become such a vital tool for sharing emotions?  The gratification derived from it under such circumstances is beyond marvelous, beyond healing of the mind.  The reports were instantaneous, uncensored and hilarious and became even more amusing when Miley Cyrus appeared on the stage to perform.   Clearly her intention, that night at the Barclay’s Center, was to be the most news worthy artiste at the VMAs when she flexed her thighs, dipped her hips and began her act.  Within moments Miley moved from a throttle to full speed, running on premium rate.  She had free reign of the stage.  She switched into an erotic dancer beyond anyone’s wildest dream.  She exposed her tongue, leaving it to hang tough for all to take stock.   She whipped, lashed, stabbed and grinded.  There was no stopping Miley Cyrus and her provocative tidbits as she performed.

The cameras focused and captured the reactions from a few members of the audience.  Their facial expressions led me to believe that they were seeing duppy, something out of the ordinary.  How could a girl bearing the resemblance of a Miss goody two-shoes act in such a dazzled manner.  While Miley had me bamboozled with her choppy, salacious dance pieces, the temperature surrounding the comments on Facebook went from normal to fever pitch.  As for me, so many things came to mind that night as I watched:  Miley is indulging in a publicity stunt, Miley is telling a story, Miley is crying out for help, Miley is being rebellious about something,  Miley is drunk.  I also had it in my head that Miley based her dancing on the traits of the Jamaican dancehall as well as trying to perform like Beyonce and Rihanna.  Poor Miley!  Yuh nuh ready yet. Yuh ha fi wheel an cum agen, (You are not up to par.  You should go practice and then come back) I decided, summing up her anemic dancing.   This was confirmed when I recalled the once popular Jamaican movie named Dancehall.  The girls in their delivery appeared vulgar yet they were mesmerizing.  They flexed their bodies with expertise and difficult grace, which were totally out of Miley’s reach.

By the next day, Miley’s jaw dropping performance, now labeled as twerking, landed her in the 2013 MTV VMAs class clown category.   She was marinated with comments and became the main course in the house of public opinion notwithstanding the fact that television hosts, late night comedians and newspapers had to partake.   The spin maestros were the most interesting among the group.  Their arguments, comments and views were superlative.  One television host was quick to dismiss talks about Miley being inappropriate further stating that her performance was no different from the participants at the carnivals in the Caribbean.  On Facebook, one person commented that there are more important concerns to address than Miley’s twerking.   According to one of my Jamaican neighbors:  Miley’s bread is well buttered.  She is up easy street compared to all the miseries that are happening to other people around the world.

Perhaps some people saw Miley’s dance as one of the miseries in the world.  If this is so, then there must be truth in the saying “misery loves company” because a few days later Facebook erupted over another kind of dance.   This time the performance happened miles away across the ocean leading to the Island of Jamaica, where a Member of Parliament (MP) in the Jamaica Government was photographed daggering at a function he had attended.  In the picture he can be seen on tippy toes with his body resting against his female partner who is bent forward in front of him.  A person who has no knowledge about this dance and seeing the picture for the first time would assume that the female was inviting the MP for a piggyback. 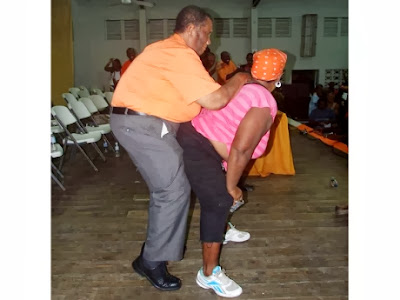 While I remained amused about the position that the MP had assumed on the dance floor, there were a cross-section of Jamaicans at home and abroad that lashed out in no uncertain terms at him for what they saw as his inappropriate behavior.   They also mentioned that a man in his status should not have displayed the qualities of a virago on the dance floor.  Why not?  Isn’t dancing supposed to take any form?   This could very well be a topic to be taken into consideration at another time.  Maybe the MP would be interested to lead a discussion as prior to the brouhaha surrounding his daggering he was noticed as an avid dancer.  By all appearances he is not afraid to try different dances regardless of his rotund physique.  Needless to say this was no consolation to the people.   In due course, someone decided to utilize his or her designing skills and technique.  This resulted in photo shopped pictures of the MP, floating around on Facebook pages, showing him in some very risqué dance moves with various women.  One of the women in this situation happened to be a prominent non-Jamaican athlete.  This then had me thinking, could the picture of the MP that was posted with him in the daggering position be the work of photo shop?  My thoughts were later dispelled when I read one of the Jamaican newspapers and saw where the MP reported that he and his female partner were only having fun on the dance floor.
So what about Miley Cyrus?  Was she also having fun at the 2013 MTV Video Music Awards?    In plain Jamaican dialect it would be appropriate to say:  Miley bruk out.   Now that we have seen this side of Miley, what will be her next move?
Tah-tah!   To dance is to exhale.   It’s up to you.
Grace Dunkley-Asphall, Copyright © 2013


Page views and audience to date: 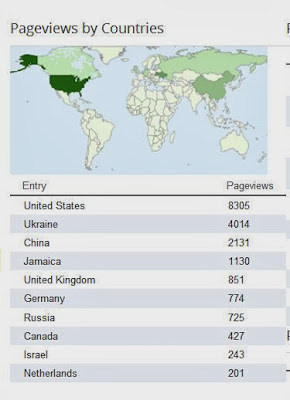