Tessanne Chin’s Bread and Butter: Dishing out the remnant 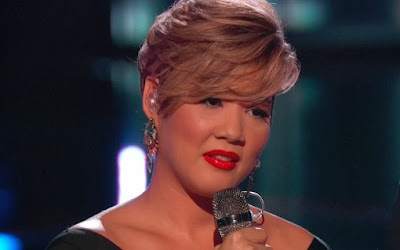 NBC’s season five of the Voice, in the year 2013, served its viewers a lineup of people from different backgrounds, all vying for the top spot in this American singing competition.  In the end it was Tessanne Chin of Jamaica, West Indies, who became the victor.  It was a case of “Wah be fi yuh cyaan be un fi yuh”.  In other words it was destined for Tessanne to be the winner of the Voice competition.  Her blind audition of Pink’s song, “Try”, was amazing.  She had barely begun the song when all four judges, namely Christina Aguilera, Cee Lo Green, Adam Levine and Blake Shelton, turned around in their chairs to see the person who was doing justice to Pink’s song.   The saying “charm the heart of a dead rat bat” is not a riffraff indulgence when it comes to witnessing raw talent because they went goo goo ga ga over her, each one wanting to be her coach.

Tessanne Chin’s road to international approval, via the Voice, was cheered by many people in America, Jamaica and elsewhere.  Inasmuch as this might have been the case, there were some Jamaicans, including me, who had never heard about this singer until she appeared on the Voice.  It was refreshing to see that I was able to stop for a moment and focus on the positives that come from Jamaica.  It is no secret that Jamaica’s behavior is of concern:  the escalating crime, the commotion and uneasiness among some of its citizens who believe the Politicians are lackadaisical towards the betterment of the country.  To date one of the major concerns surrounds the avalanche of youngsters in the music and entertainment industry whose lyrics and dancing have taken dancehall to another level.  It is a level that is poisoning and corroding minds, ultimately resulting in the blockage of worthwhile ventures and opportunities for self and others.    Tessanne not only brought out the greatness in Jamaica, she also captivated the judges on the Voice with her Jamaican tongue as they dug into her background.  Her most impressive statement was when she mentioned that in Jamaica singing was her “bread and butter,” her livelihood.  This statement was like the brawta (something added on for good measure) on her already great performance of Pink’s “Try”.  The statement resonated so well among Tessanne’s die-hard supporters that it would later become the slogan of her camp here, there, and everywhere.   They even donned T-shirts with pictures of bread and butter.

The richness of the Jamaican dialect remained prominent, splattered across various pages of Facebook.  People were joyfully uncensored.  I saw comments such as, sell auff, slap wey, tun up and safe like safex to name a few.   There was also a weekly comical commentary of the Voice on YouTube.   The author, ‘Dutty Berry’ whose real name is Russhaine Berry rose to fame in Jamaica and overseas on account of his presentation.  I later read online that he was an unemployed University Graduate in Jamaica, but not for long as   Tessanne’s bread and butter allowed him to receive gainful employment.

I also had many exciting moments at home as I watched Tessanne Chin’s weekly performances on the Voice.  My reaction went from silence to shouts of excitements to goose bumps.   I slipped in and out of various accents and tongues.  Gwaan gal a suh we dweet!  Damn y’all know with that voice ain’t nobody gonna beat her.  What a lickle chiney pickney cyan sing sah.  Mama Mia! Rahtid!  Bloody hell lassie!  I was beside myself with joy and wondered how I would fill my nights after the NBC’s season five of the Voice ended.   In the meantime Tessanne’s popularity had soared and it awakened Jamaica’s history, bringing awareness to the Chinese population in Jamaica.  The Chinese people were among some of the indentured laborers that arrived in Jamaica in earlier times.  There were also some who arrived on their own.  Jamaica is a diverse population, a melting pot; hence, our motto “Out of Many One People.”

While people were ‘kicking up rum punch’ (having a lively time) over Tessanne’s win, there were others who wanted to sequester the shouts of hooray.   As it were, prior to the grand finale of the Voice, Tessanne had viewed the vehicle that was included in the winner’s package and in doing so she expressed that the vehicle would be suitable for the bad roads in Jamaica.  Somehow, this was treated as if Tessanne had exposed the deepest darkest secret within a family.  I smiled because while they were vilifying her, it is true that the terrain in Jamaica is such that a four wheel drive is better for the mountainous areas which fall prey to the hurricane seasons.  It is also true that some of the main roads and other roads are in deplorable conditions.   In my opinion I am happy that Tessanne spilled the beans because eventually all the bad roads will be repaired and become pretty ‘nylon’ or ‘barber greene’ roads.  Granted that people are entitled to their opinions, I also couldn’t avoid gasping at the comments made by the “kill joy” crowd. Their definition of celebrating success is idolatry. Next, there were others who mentioned that Tessanne would be using her voice to sing for the Devil instead of the Lord.

At the end of the day, I can safely say that NBC’s season five of the Voice was well received.  Tessanne Chin won!  If possible, we should not let the remnant from her bread and butter be swept aside. Please grab a doggie bag to collect the dishing of the remnants: It has opened doors of opportunity for others.   It also proved that through hard work, deportment, humility, honesty, perseverance, respect and staying focused we can eventually realize our goals.  It also proved that a friend can encourage us to pursue our dreams.  Tessanne’s friend, Shaggy, renowned entertainer, encouraged her.   It also proved that ‘in the worse of us there is a little good’.  In this case Jamaica is the ‘us’.  Jamaica’s discipline can be restored and be the beautiful island it used to be.  In the words of J. E. Andrea Nembhard, one of my Facebook buddies, ‘Jamaica is a spiritual experience’.  She believes in her heart that this is truly so and it came as no surprise when, a few months ago, she started the Facebook page “Jamaica a Spiritual Experience”.  Again, this gives credence that Tessanne Chin’s presence and stellar performance on the Voice should be seen as a positive influence for the island of Jamaica.