To Snitch or Not to Snitch 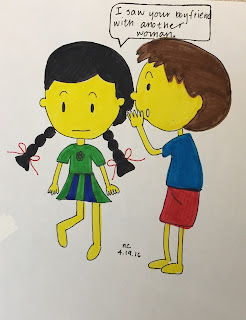 Recently in the news, Iggy Azalea & her fiancé Nick Young were trending. It wasn’t for his skills as a NBA player for the LA Lakers, nor was it for Iggy’s rapping skills as a hot, Music phenomenon, and it certainly wasn’t because of their interracial dating, Iggy being White & Nick being Black. It was something more sinister…an old affair Nick had with a 19 year old beauty years ago while he was dating Iggy, that he told his LA Lakers teammate about in a candid moment of “guys talk” which the teammate not only recorded but posted for public hearing.

Needless to say there were varied reactions to this snitching, some even accuse D’Angelo Russell of breaking the “guys’ code” which I did not know existed, but I am not a guy so I guess that is not surprising. The question is “To Snitch or not to Snitch”? If you are like most of us, you have had to make that decision at some point in your life. Many years ago, while I was young & innocent, I was BFF with a guy that I am still BFF with to this day. He was married to a woman who he knew was unfaithful in the past but they were trying to work on their marriage & build a new life for themselves & their son. He worked hard, multiple jobs, college classes, to take care of his family. I became friends with his wife naturally, since he was one of my best friends.

One day, another BFF of mine, who knew my friend & his wife but were not their friend, told me the heartbreaking news that she saw my friend’s wife each morning, publicly locked in all manner of romantic embrace with a man who was not her husband, as they wait for the train. I was disturbed. I got along so well with her; I liked her a lot, so this was hard. But this was my BFF she was cheating on! I had to decide whether or not I would snitch. And for me, my loyalty was with my friend & so I told him there was trouble brewing in his home, I told him exactly why I said this & that he needed to attend to his wife. He was shocked! And hurt! And embarrassed! He was a smoker and I stood in silence as he leaned against his car & chain smoked 3 cigarettes without speaking a word after the initial brief questions! We were both silent. I just stood in solidarity with him. He finally said, “I’ll talk to you later” and left. My friend confronted his wife, who was unrepentant & confrontational, confessed everything & said she was leaving, which she did! She eventually married that other guy & my friend moved on. Yeah, it was tough to watch this play out but I felt I had a responsibility to my friend. 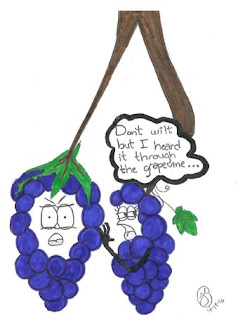 In Iggy Azalea’s chart-topping song “Black Widow,” there is a sentence that goes “you use to be thirsty for me but now you wanna be set free. This is the web, web that you weave, so baby now rest in peace.” Well, what is the right thing to do when these words from the song becomes reality for a friend you know very well? Is it none of our business? Do we snitch? Or do we not snitch? I don’t believe there is a “one size fits all” answer to this question because each situation is unique and deserves its own judgment call. With that being said, there are a few things that immediately come to my mind that we should consider in our decisions “to snitch or not to snitch,” such as:
Is the person being cheated on violent? Anything is possible but is it likely they would harm the cheating partner? I would not want to be associated in any way with another person’s murder so that would give me reason to not snitch! Remember, the Bible warns us in Proverbs 27:4 “Anger is cruel, and wrath is like a flood, but jealousy is even more dangerous.”

Do you have an ulterior motive for snitching? In the case of Iggy & Nick, the teammate was not a friend of Iggy so what was his purpose for snitching? Could it be jealousy? Here was the super gorgeous, famous, White girl that his friend was engaged to & maybe he wanted her? Maybe he was hoping to make a move? I don’t know & it’s possible it’s nothing like that but I often wonder about his motive. So, as Shakespeare wrote in Hamlet, “To thine own self be true…”! What’s your motive?
Who is your loyalty to? For me it was simple. As I said before, I was loyal to my best friend even though I had a good relationship with his wife. My relationship with her was a result of my friendship with him so I was not confused about where my loyalty laid.
I have concluded that in terms of extra-relational affairs, “to snitch or not to snitch” is a personal decision that one needs to make carefully, not in haste. There is no clear right or wrong unless someone could lose their life and remember that someone could be you, the snitcher! In the end, go with your guts & keep in mind when it comes to snitching, “To thine own self be true…”