When the Rum Is In…Wit, Brouhaha, Tragedy and Sex Mingle

Skrunk as a dunk!  Drunkards attract gossip. They are laughed at and mocked by the common mischief-makers.  To a zealous preacher, drunkards are causes for concern.  They are viewed as lost souls.  So, it is hook line and sinker when a preacher looks at the congregation from the pulpit and then in a wailing voice delivers:  My brothers and sisters let us take heed as we traverse this land because it is written that wine is a mocker, strong drink is raging.  And whosoever is deceived thereby is not wise.  Such admonition is geared to set off deep and long groans from the congregation especially among the guilty members.  They are sanctified in the moment, truly penitent of all their indiscretions, perhaps until it’s time for another drink of intoxicating liquor. 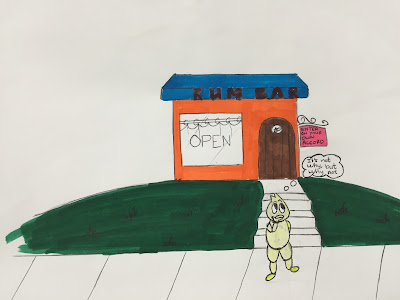 How did sugar-cane mutate into such a wanton brute as rum?  Sugar-cane is a juicy delicious product with the end result of a toothbrush.  To tell the truth sometimes I wonder about chemists and scientists and their zeal to accomplish.  The layman otherwise classified as the try-a-thing-person should also be given thought.  This individual through trial and error will concoct palatable foods and beverages in the kitchen at home which sometimes end up on store shelves.  Whatever the rigmarole is about rum being a byproduct of sugar-cane, the fact is, there is intoxicating liquor available to the public.  And the transfiguration, whether or not it is consumed in moderation, has the potential to stir raucous far more than its purpose in the world of the supernatural and the medicinal and cooking values established in the olden days.  Some people taking rum under scrutiny will refer to it as devil’s soup particularly when it is linked to cantankerous and catastrophic behaviors.  This brings to mind the brawls at bars and the drivers who consume alcohol and then get behind the steering wheel of a vehicle to drive. Their notion of being a better driver after consuming alcohol is rather preposterous.  Luckily there are laws to control that widespread belief.


The effect rum has on its patrons is mind boggling.  It releases inhibitions.  Shy people become chatty and frisky.  People who knowingly avoid others daily will engage them in conversations and to the point where loose lips sink ship.  What was once held as secret becomes public knowledge.   It is also noticeable that a rum-drinker loves to do renditions of lullabies and love songs.  Reciting poems and engaging in debates, history, geography and religious knowledge are among the likes.  Some rum drinkers will sit quietly, stare blindly into space and cry for no apparent reason.  Some will laugh uncontrollably.  Some with pent-up emotions will speak their minds; and true to the saying: A drunkard speaks with a sober tongue.  Some will ask the same question or repeat the same story a million times as they drink.  I pause to think about the functioning alcoholics.

Is rum a weird product or is it the drinkers who are weird?  Some who have been stung by the full strength of rum will say that it is made from boxing gloves and underwear.  Reason being, it allures the drinker to fight or make love.  As farfetched as this may sound, there are men who claim that drinking rum increase their staying power during sexual intercourse.  Colloquially speaking, they will ride their partners for hours before “dem bruk” (ejaculate).   Then there are times when the rum-drinker tries to exercise wit and it would always be about Jesus.  One example is that Jesus found it difficult to level with the people because he mostly delivered sermons from the top of a mountain.

Rum is truly a spirit, a spirit which influences intention and interpretation.  Sometimes there is an enlightening moment.  I recall a birthday party where a tipsy friend and I lamented that people of the darker hue had a habit of holding nighttime social activities.  Are we ordained to do so?  Adding to that, the majority of us arrive at parties long after the start time...sometimes close to the finishing time which is daylight.  In some cases, which I have witnessed, the arrival time for 9:00pm is usually 1:00am.  People of the lighter hue, on the other hand, always seem to have their activities early evening with an end time of midnight or sooner.  According to my tipsy friend, it’s the slaves’ behavior that still lives in us.  He then went on to say that the slaves attended to their masters’ requests constantly.  They were not allowed to eat meals until after their masters and the masters’ families and guests had eaten and all entertainment for the day had ended.  By that time the night had advanced drastically; the only time available for the slaves to attend to themselves and engage in their own social activities.  I remain impressed by my friend’s talk.  Who would have thought that people of the darker hue had inadvertently embraced the unavoidable practice of late night doings from the slaves?  Tom drunk but Tom is no fool.