There are different kinds of testimonies. Back in the day when there was much respect for religion, one of the most exciting things to me, as a little girl, was to attend revival meetings. The nightly meetings were held at the house of worship in the village where churchgoers had the opportunity to deliver their testimonies. The testimonies rivaled a storytelling session by the greatest raconteurs. One by one members of the congregation shared what the Lord had done for them. Some were happy to report that they were brought back from the brink of death, having recovered from a serious illness. Others narrowly missed a lightning strike. Some farmers spoke about the bounteous crops they reaped whereas some asked for prayers for the Lord to continually bless them. Make them prosper in all they do. Those who were in a strong relationship with their faith, expressed that is was their determination to follow the Lord Jesus Christ their personal savior and soon coming king. Some testimony-participants drew laughter from children in the congregation, the moment they stood up to deliver. Laughter swelled too if Lucifer decided to lay hands on the ill-mannered persons to break wind, especially in the middle of a testimony. The bursts and booms became a parody of an anthem. The culprits always seem to hold their wind until testimony time. Perhaps they considered their behavior late night entertainment which became a detriment to children who giggled, including me. We were not spared the brutal reprimands from clergy, board members and our parents. 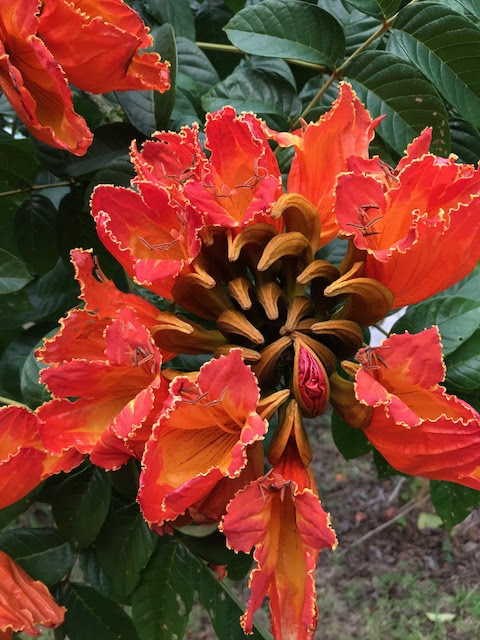 If someone wants to share a testimony in the twenty first century, there is no appointment and no special venue. It is done any time, in any fashion and anywhere. Person to person delivery of testimony is more appropriate for some people while others consider social media to be the best place. One way or the other, the fact is that people are doing what they want to do and are thinking less about doing it at a place of worship. I often take nature walks when I visit the island of Jamaica. So one day while looking at a tree in a cluster of bushes I couldn’t resist taking my eyes off its fire red bell-shaped flowers. A relative, with me at the time, told me that the tree is referred to as chinny pee pee. Upon close inspection I noticed the buds on the flower. She relieved one from its hold, pinched a hole at one end, poured the water from it and then told me that she used it as eye drops. Her daredevil act scared me. I would never take such a chance with my eyes. Using the special water meant nothing to her because she was a seasoned user of the old remedy which she said worked for many people. She told me that they all shared their testimonies about the water found in the flower bud of the chinny pee pee tree.


After four years of using the medicine from the chinny pee pee tree the time came for my relative to share her testimony. It occurred, July 2019, when I visited Jamaica. We sat on the balcony of her house talking about this and that when she decided to read me excerpts from a book. After she was finished reading, she said to me, girl you don’t notice I am not reading with my spectacles on. The chinny peepee worked to rahtid, she laughed. No more specs! My jaw dropped looking at the obvious. I was amazed. Shocked! It was a pleasure to see her bragged about the medical miracle brought about by chinny peepee, the old time remedy found in the bush, not from a lab or pharmacy. Her exuberance allowed her to also demonstrate and prove she can string a needle with thread without wearing her spectacles. Damn, was all I could afford to say at the end of the demonstration, wishing I had the wherewithal to market chinny pee pee in America.  To further set the situation on a hype, another relative told me that it’s the most sterile water anyone could ever find. Birds gather a drink of water from it too. It sure is astounding to hear about the things that some of us didn’t place value on, have now become the ones working wonders. Today in a world of modern medicine, if the professionals were to hear about chinny pee pee, the miracle eye drops, what would they have to say about it.


CAUTION
At this juncture, let me mention that I am not a pharmacist, a naturopathic doctor or a medical doctor. Neither am I a prognosticator. Whatever I share in this essay about chinny pee pee should not be tried. Neither should anyone favor chinny pee pee over medications they receive from any healthcare specialists for an eye condition. I will not be held responsible for any bodily harm or medical mishap because of obstinate behavior. Please DO NOT use chinny pee pee for ANY medical situations including as an eye drop.  Let it be known that my main purpose in writing this essay is to share the testimony of a relative who favored chinny pee pee as her eye drops.  And to also mention that I have seen her applying chinny pee pee a few times to her person.

Tah-tah!  Puss and dog do not have the same luck. Never get involved with anything that you have no knowledge of. Or, just because someone will report good results. Seek professional advice and help before you indulge in anything. Results can be different.