Old Practices In An Era Of Update

One of the definitions found on Google for the word update is: “make (something) more modern or up to date”.

Every culture has old practices. Jamaica, the sun of a beach and an island in the Caribbean, boasts numerous old practices which are unique, complex and with purpose. They are deeply rooted but how well are they holding up in modern times? Are they still relevant? Many of those old practices, dead or alive, teach us to embrace good discipline, proper hygiene, trust, honesty, righteousness, and cooperate in the various aspects of community life towards amelioration. The one thing that is certain about old practices is that there isn’t a fence built around them to protect them from updating or an attempt to do so. 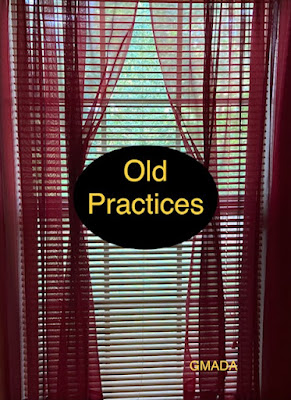 Technology, the angelic tyrant of modern times, is here to torment, confuse, replace and update. It’s a cleverness that isn’t readily accepted by a Baby Boomer like me. However, in my Jamaican dialect voice it’s fair to say, wi get leff, whenever we refuse to acknowledge the practices of modern times. In other words, there will be little to no progress in goals or day to day activities because we lack the newer skills, tools and information. A few people will see updates as neither here or there with them.The only thing that matters to them is to remain undisturbed in their old ways and practices. They really don’t care if Sunday falls on a Monday. Or, if pigs will one day ride on a donkey to the moon. And for argument's sake, stopping by Orion’s Belt to check out Alnitak, Alnilam and Mintaka; the three bright stars. Adding to that, never try to update the old practice of eating rice and peas on a Sunday. Because that would warrant a sturdy telling-off from a certain culture. I know my Jamaican people and this old practice that is dear to our hearts. Any update about cooking and eating rice and peas on a Sunday should remain a personal decision.

Personal decisions are as necessary as the gadgets, mobile phones, tablets and laptops that have become commonplace among us. Personal decisions are viable more than the various social media platforms set in place to fortify and at times manipulate. And most alarming is the rapid growth of technology which doesn’t allow me enough time to breathe or relax. I am inundated by the constant flow of new features and updates and non edible cookies. Perhaps the updates are manufacturers' ploy to relieve us of the little cash that some of us have. I am sure the manufacturers are aware that we are intrigued by the antics of intricate machines. Especially their traits which are likened to humans; and the audacity of the engineers to associate the operations and functions of the machines with the medical terminologies and descriptions of humans. The flip side to all of this, is that modern times has allowed us to improve our sex lives with touchy-feely gadgets, shared screens and video chats. We went from imagination, phone sex, and magazines with pictures to viewing live performances. And quite admirable is the ability to perform invasive and non-invasive medical procedures to repair failing body parts.

Alexa, the queen of gadgets, could do well with some old practices; she sometimes joins conversations without being asked to do so. Not to be overlooked is the fact that some of us in the name of update have champagne tastes and beer pockets. We are with low finances yet have interests in high priced goods and electronics. We will readily hang our baskets higher than we can reach them to impress and please. And to top everything: the various updates come without sympathy and excuses. They compel conformity. And if we don’t, rest assured that someone will tell us that we are not marketable. It’s frightening to be caught between the devil and the deep blue sea because complacency can be the comfort zone for most of us.

After all is said and done, modern times in all its shining glory is intrusive and needling. It diminishes good old practices, and culture. Its many loopholes attract greed and selfishness. Modern times is responsible for the eradication of sound, fair, and sane politicians. Modern times help us to do things with much ease. Voice command, clapping of hands, automatic and touch of a button are highly embraced. They will however inadvertently encourage laziness. And if we are not careful our health could be in jeopardy because of the lack of exercise and the ability to think for ourselves. Unfortunately, to have a discussion against updates is an advertisement to attract ridicule and to be labeled ‘old fashion”. As modern times and updates continue to pose their sometimes rootless pitch, what could be more frightening, interesting, controversial, important and filled with mixed reactions than the decision taken in the year 2022 by the Supreme Court of the United States of America (SCOTUS) to overturn Roe v. Wade. Sealed lips.

Tah-tah! Move along with the flow on updating. By the same token don’t be too quick to abandon the old. Balance is required in all we do.